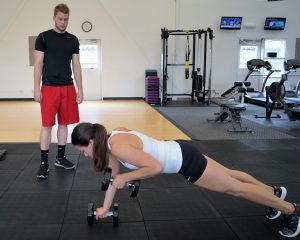 What exercises or workouts do you perform when you go to the gym? Maybe you choose the latest workout from a fitness magazine, search online for a “10-minute ab workout”, or ask your buddies what lifts you should do. Although these methods may work to an extent, they are not the most effective way to reach your goals.
END_OF_DOCUMENT_TOKEN_TO_BE_REPLACED

Everyone talks about the importance of hydration, but how do you know if you should be consuming more?

Chris Kresser, a renowned natural health and nutrition professional says in his article entitled, “Hydration 101: How Much Water Do You Really Need,”

“There is no universal requirement for water intake, and your needs will vary widely based on age, gender, body size, health status, and physical activity levels.”

If the requirements vary, then what are his recommendations? He suggests utilizing your body’s thirst mechanism as an indicator for the amount of water to drink, instead of a specific amount.

In addition to the thirst mechanism, it is a good idea to monitor the amount of fluid you drink after exercise. One guideline according to Blake, is to replace each pound (lb) of weight lost during a workout with one pint (0.5L) of water.

Additionally, our Indy Core coaches recommend that you drink 8-10 ounces of water 20-30 minutes prior to an athletic practice, competition, or workout session.

What does drinking enough water do for your body?

Apples and almond butter, protein bars, and green smoothies are a just a few examples of snack options that fitness enthusiasts enjoy after workouts.

However, author and fitness expert, Ben Greenfield, argues that eating a snack or a meal after training is not actually necessary. Below is an excerpt from chapter 16 of his book entitled “Beyond Training.” In this passage, Greenfield explains why eating a post-workout snack is not as critical as you might think.

“You’ve probably heard about a magical fueling window. From exercise physiology books to magazine articles to websites, nearly every resources on sports nutrition says that after you finish a workout, you have twenty to sixty minutes to replace previous energy by consuming a mix of carbohydrates and proteins.

Here’s what they don’t say:

In every study or experiment that has investigated the benefits of immediate post-workout nutrition replacements, subjects were fed after completing an exercise session that they had performed in a fasted or semistarved state.

Of course you’re going to recovery more quickly if you eat a meal after a workout in which you were completely depleted of energy and 100 percent fasted. But how many of us actually roll out of bed in the morning, hope on a bike, and ride hard for ninety minutes to two hours with absolutely no fuel?

So, here’s the deal: If you’ve had a preworkout meal, or had a meal in the not-too-distant past, there’s no do-or-die need to eat after your workout – especially if you’re still burping up that meal you ate before exercising. This is especially true if you have no other workouts planned for the day, because your body can completely replenish energy levels within just eight hours of normal hunger-driven, real-food eating…

But it does make sense to refuel within that twenty- to sixty-minute window if: